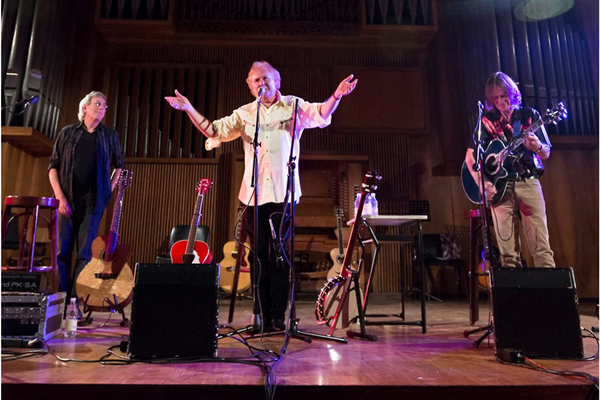 The legendary Strawbs will make their first appearance in Aylesbury as part of their 50 years tour - a special concert organised by Rotary Rocks to celebrate the 40th anniversary year of The Queens Park Arts Centre.

The Strawbs started life as the Strawberry Hill Boys before emerging into the mainstream from the British folk movement of the mid 60s. Their first album with Sandy Denny attracted the attention of A&M Records in America and they became the first British band to be signed by the famous label.

The 'Acoustic Strawbs' of the 21st century consist of the founder, constant guiding force, originator and lead vocalist Dave Cousins, described by Rolling Stone Magazine as the best Dylan influenced songwriter to come out of the UK. Alongside him longtime band members lead guitarist Dave Lambert and the astonishingly versatile Chas Cronk, who together formed the front line of the classic 1970s Strawbs.

"Never to rest on their laurels, this excellent band continues to produce classic tracks and spectacular live performances". (Q Magazine)

"Dave Cousins shows himself as a brilliant and original songwriter." (Classic Rock)

All proceeds from this event to the Queens Park Arts Centre as part of its 40th Anniversary celebrations.

Promoted by the Rotary Club of Aylesbury Hundreds.

Promoted by the Rotary Club of Aylesbury Hundreds.

2021 All rights reserved. Powered by